Ikea Sweden got some good coverage yesterday for a facebook campaign it ran to promote the opening of a new store in Malmo, Sweden. The company wanted to promote the opening of the new branch, but their budget was limited. They hired an advertising agency called Forsman and Bodenfors, who came up with the idea of using Facebook’s photo tagging feature to create a viral effect that would spread word of the new branch opening.

Forsman and Bodenfors opened a facebook profile for the branch’s manager, Gordon Gustavsson. The profile was to be used for business purposes only, as is evidenced by the vanity URL chosen for Gustavsson’s profile: http://www.facebook.com/ikeagordon – note that his vanity URL is ikeagordon, and not gordongustavsson. Better hope he works at Ikea forever…

Over a two week period, the agency uploaded pictures from Ikea showrooms to Gustavsson’s facebook photo album, and then made the announcement that changed this from run-of-the-mill social media activity to a raging campaign: they announced that whoever was the first person to tag a product in the pictures with their name would win it. And boy did people rush to tag the photos: 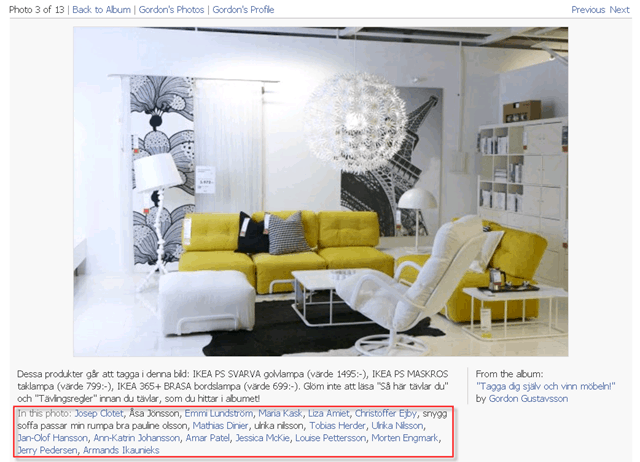 Check out this video overview of the campaign and how it was set up:

Why this campaign worked

The coverage of this campaign focused on the agency’s ingenious use of facebook’s photo tagging feature. It definitely was an original and unique use of this feature of the world’s largest social network. However, in my opinion that usage is just technical, and the reason this campaign was so successful is because it delivered what consumers want when engaging online with brands: exclusive deals or offers.

Digital marketing company Razorfish recently released its third annual FEED study which charts how technology is changing the way consumers engage with brands. Among the other interesting pieces of info gleaned from their study is the reasoning behind people’s choice to follow a brand on twitter and facebook. In the cases of both networks, the majority of people cited that they follow brands in order to get “exclusive deals or offers.” 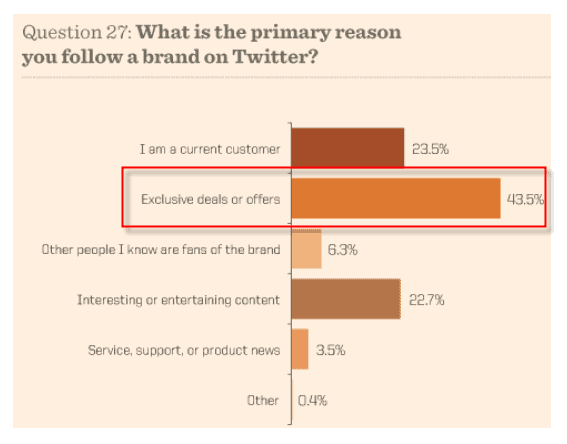 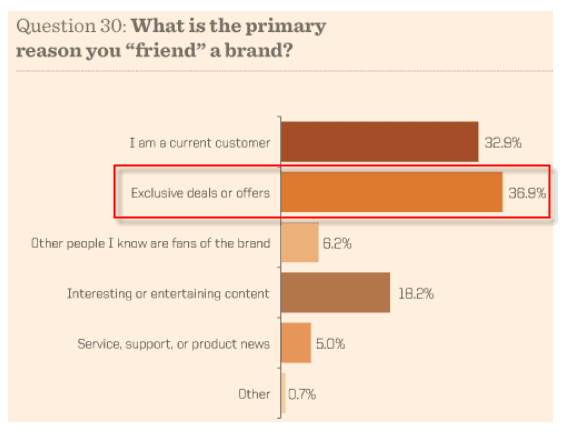 It makes sense. Unless your brand is Apple or something that makes people feel all warm and fuzzy, consumers don’t want to be your brand’s “friend.” They may like your product and use it on a regular basis, but that doesn’t mean they want to create an ongoing and public relationship with you…unless there’s something really worthwhile that’s in it for them. In the case of this Ikea campaign, people were more than happy to tag and share photos of Ikea showrooms if it meant that they would get to take a couch home for free.

Another example of success through rewarding consumers is br.st. br.st is a new web-based twitter client that became one of the top trending topics on twitter yesterday as well:

While I’m sure this new twitter client is nice, it didn’t get this level of exposure because of their great features. They got it because they are handing out 4 MacBook Pros and 21 Nintendo Wiis to people who tweet about br.st. As br.st CEO Jared Stauffer says on the site’s home page:

Instead of spending money on advertising we decided to give it to you in the form of prizes. So help spread the word by telling your friends and enter to win some cool prizes. 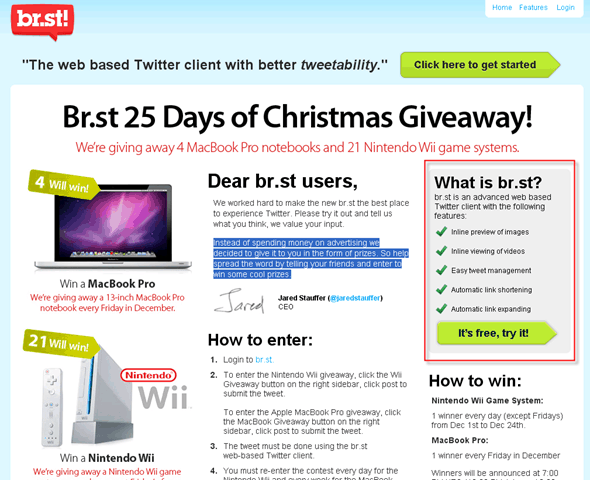 While br.st may have gone to the extreme with their prize campaign, it did succeed in getting them a lot of viral exposure for a new product.

Many social media evangelists talk about how the social networks can help you and your brand create warm and fuzzy relationships with your consumers. It’s not true. Consumers don’t want a warm and fuzzy relationship with most businesses or products. But they will help you spread the word if you offer them something really worthwhile in return, like a free couch or Ninento Wii. So by combining the features on the social networks that have the potential to make your brand or campaign viral with consumers’ base interest in free stuff, you’ve got a great recipe for social media success.